Yesterday marked the arrival of a unique art installation beneath the floorboards of the Bridewell Theatre. Traces is a collaborative project from students at Kingston University, incorporating projections, photographs and drawings within the Foundation’s Victorian swimming pool.

The exhibition is a reflection on the forgotten or left behind. Katie South, one of the curators, told us how the preservation of the pool informed the work massively. The style of the area also meant that they couldn’t really approach this exhibition like a typical gallery space. Instead, the students had to utilise the environment, incorporating the structural elements for the different work on show.

This becomes evident when you venture down to the white tiled basin of the pool. Various wooden beams, which were installed to support the seats above, now provide scaffolding for canvases. They are industrial frames for the flickering projections, which also box off different areas of the pool. As a result, the space becomes a series of isolated compartments.

The overarching theme of the exhibition seems appropriate for the space it’s in. According to the Foundation’s minute books, the last documented swimming season was in 1968. The pool’s closure was then agreed in the second Governor’s meeting of January, 1969. As far as we know, it’s been barely used ever since. During our tenure, the floorboards have been lifted only once, for a site specific theatre production called Amphibians.

Upon leaving the exhibition, we searched the archives for a few personal tales of the pool, in what was our own attempt to salvage the traces of when it was a lively and active venue for swimming.

A three page booklet, titled ‘St Brides Swimming Pool Memories’, documents various personal accounts of the pool. It’s effectively a very honest guest book from a number of people who learnt to swim here. The reviews were ‘mixed’, with the hygiene of the pool being a favoured topic of conversation:

These complaints are all taken from the same swimming class. Although, similar feelings were also present back in the early 1900s. A letter to the Editor of the Evening Times, written around 1909, documents a very disgruntled user of the pool, who wasn’t happy about the water. According to the anonymously named ‘bather’, the water was ‘so foul that it was not possible to see the bottom, even at the shallow end’. He continues, ‘In fact it was only possible to see about a third of the white glazed brick below’.

Fortunately, a week later, the Foundation’s swimming secretary countered the complaint. He writes ‘It is a boon and blessing to the City worker on these hot days. I point blank deny that it is dirty or ill kept’.

Whether the pool really was one of the most disgusting in London is to be decided. The fact that the only person who professed clean water was an employee of the Foundation might be a little bit odd. Regardless, these artefacts provide a glimpse into the days when the pool was ‘alive’.

Below are a couple more tales:

And our favourite entry…

Tomorrow will be your last chance to see Traces. This unique installation has meant that we can add another tale to the history of the pool, while at the same time provide a platform for creativity. If you wish to visit, then it’s open 12pm-6pm. Entry is free. 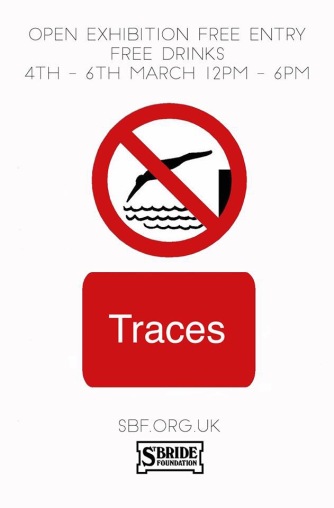 Access to the exhibition also allows you to take a glimpse of the set for Tower Theatre’s current show The Habit of Art, which runs until Saturday.

3 thoughts on “Traces of the Swimming Pool”