Bob Richardson has been into the St Bride Library archives for a special Election Day blog article.

ONE HUNDRED YEARS AGO, in 1915, we were due to have a General Election in the United Kingdom, but the outbreak of the Great War put paid to that. The Parliament Act of 1911 had reduced the length of a Parliament from seven years to five, and the previous election had been in 1910. (In fact there were two elections that year due to a constitutional crisis caused by the rejection of the Budget by the House of Lords, but that’s another story).

As you visit the Polling Station today you may be struck by the rather anachronistic posters which identify those buildings designated as such. Some local authorities have held huge stocks of these paper banners for much of the 20th century, and in some parts of the country those on display today may have been printed many years before you were born. Some modern versions are simply litho-printed copies of posters originally printed, in a handful of cases, before the Second World War.

The UK’s main supplier of printed election paraphernalia is Shaw & Sons, established in the City of London in 1750 by Henry Shaw, a native of Nairn. The majority of the Polling Station signs you see today as you cast your vote at a local school, town hall or perhaps even the St Bride Foundation (we are a City of London Polling Station today) were almost certainly printed by the company at their works in Crayford, Kent. The design has changed little in almost a century, retaining the simple sanserif bold condensed face familiar to generations of voters. Originally printed from oversized wood type, they are now produced by lithography. The typeface has changed very slightly over the years, although the differences are sometimes subtle and not immediately apparent.

The print code on some of the older posters indicates that they were produced for General Elections many years ago. The cluster of tiny numbers printed at the foot of the signs, typically “500M/9/55” indicates in this example that half a million copies were produced in September 1955. Check your local signs to see when they were printed – they may be older than you.

Shaw’s have produced many millions of these paper signs over the last century, and continue to do so, but some local authorities are still using stock originally purchased decades ago. There are a mixture of old and new banners decorating the entrances to the 50,000 Polling Stations around the UK today. You can read more about the history of Shaw’s at www.electionsupplies.co.uk

Of course the St Bride Library holds a number of items relating to Shaws, including a commemorative booklet issued in 1950 to mark 200 years of trading, and a collection of 25 proof sheets showing some of the more exotic letterpress faces available a century ago.

General and local elections have always been important sources of revenue to the printing trade. The production of ballot papers, posters and candidate publicity material kept local and national printing businesses busy for many months in the run-up to polling day. That remains the case today. 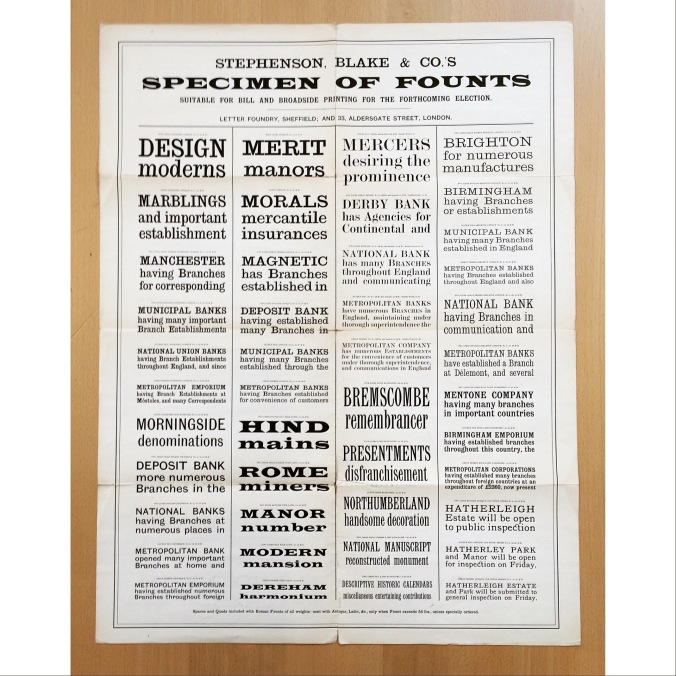 Here at St Bride we hold a small amount of psephology (election science) related material, including a poster from Stephenson Blake, who recommended the use of certain typefaces for election printing in the late 19th century. The pre-point-size names used to identify each face suggests that the poster may have been produced for the election in 1895 or perhaps even earlier.

Whether the typeface recommendations were based upon anything other than legibility is open to question. Stephenson Blake were experts in marketing their wares, but were also known to publicise faces which were held in large quantities, or even downright unpopular (such as Francesca Ronde, based upon the handwriting of Lady Frances Stephenson) in an effort to move overstocks. Francesca Ronde was something of a vanity project, and sales staff were instructed to “push” sales of this face, but printers didn’t like it and it remained firmly on the shelf in Sheffield. It certainly wouldn’t have been much use for election material but apparently Four Lines Antique No. 3 (a bold slab-serif face) was just the ticket, as was Double Pica No. 13.

The choice of typeface for election material is perhaps rather more significant than we generally assume. The use of the Gotham typeface in Barack Obama’s 2008 campaign is generally acknowledged as one of many factors which contributed to his eventual success. Inspired by lettering on the Port Authority Bus Terminal on New York’s Eighth Avenue, Gotham has now become ubiquitous. The graphic designer Brian Collins described the use of the face as the “linchpin” of Barack Obama’s campaign imagery. I wonder if Mr Gladstone ascribed his successful 1880 campaign to the clever use of Double Pica No. 13? I suspect not.